NEW - Curse of the Surf Zombie 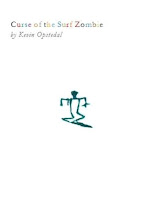 "Opstedal's noir palette covers a large swath of the California Coast, from Pismo to RCA. Loaded with atmospherics, like Turner at his edgiest. Let there be light, but wear 'dark glasses', and of course, watch out for weather forecasts that call for 'partly sunny w/a prevailing sense of impending doom'...John Donne comes to mind, early and late." - Donald Guravich

"Curse of the Surf Zombie reads like the Wasteland on Hopped up Sonnyboy Williamson driving Thomas Pynchon through the streets of LA in a '68 Yellow Impala with a Dodgers hat and a case of French Ticklers in the trunk." - Michael Price