As If I Have Seen All This Before

Dark blue (green) of the sea
beneath a stainless steel sky and
I’m feeling eventual behind dark
sunglasses waiting for your
violin solo to pierce the tide
where even now the stained glass
shatters on rocks older than the
survival instinct Mexico
disguised as Japan swimming
closer than the gull-wing mist
that tips your eyes it’s true you’re
already counting the stars
& I’m whatever reaches back across
the moist shadow of your breath
Posted by Blue Press at 11:03 AM


leaning against the rain

The Rapture the Next Time

I was gonna hoist one to all those
motherfuckers left holding their dicks
when the rapture didn’t
happen
three or four dollars left
in the bottom of the bottle
one beer can with a fuse in it
The True Meaning of Time
& wireless reception
Tell the orange girl
emblamed in the turquoise bikini
the roach of “whatever”
like a chained dog
panting for more
”we which are alive and remain shall be
caught up together with them in the clouds,
to meet the Lord in the air: and so shall we
ever be with the Lord”
Do they ever read their fucking Bible?
“But of that day and hour knoweth no man,
no, not the angels of heaven,
but my Father only”
Truth is I, for one, never paid it any mind
although if it ever was to happen
I'd really dig having a ringside seat
Posted by Blue Press at 4:58 PM

Invasion of the Body Surfers

We lost it all in a
curled up corner of the sky
tucked like blue velvet over the palisades
but we’ve got the ocean to think about
& an empty parking lot to hold hands with
when we leap beneath the wave
as lit with carbonated sunlight
like beer bottles hurled against the crumbling sea wall
Your inexorable eyes
bend no more than the cycloramic tide
obliquely sequined although I
never thought its prophetic sequel would be
drenched in sunset
lavished with impartial tears
veering on azure blades above the splintered
paradigm its strings recast in silver
unlike the shadow painted on the sand
already rusting in the salt mist that drops like a chunk of concrete
ripped from the page of our
next-to-last last tango
Posted by Blue Press at 1:58 PM

BIKINI COLLISION COURSE
Water beneath the ocean
for the sea urchin, for the abalone,
for the suicide’s bath

CATHOLIC BOY
wiping the rain from his RayBans

“WE NEED HELP, THE POET RECKONED” (ED DORN)
on the flipside of a delta slide version of I Wanna Be Your Dog
with subsidiary barking harmonicas
& tide charts in the upper register

A REAL HEARTBREAKER
beneath the ripple patterns & regret
tombstoned in the palomino sand
Posted by Blue Press at 6:09 AM

A surfboard in every refrigerator

Smacking my lips at every pantomime shimmer
that ripples on the surface of your tender denial
(a delicate architecture comprised of fishbones & concrete
or a distant memory of civilization
like spilling seawater on the ocean floor
pelicans of copper & of steel
& silk things that rust at the edges of tide pools
when you’d just as soon park it in a barcalounger on the beach
half buried in the sand)
Such passion skids out of control for those who disregard
true romance
like a lull in the action plastered with million dollar bills
which is why I’m loading the squirt gun with tequila
& rocking the mortuary RayBans             at midnight
with knocks & pings in the terza rima
Posted by Blue Press at 5:41 AM

I was in high-school when I bought a copy of A Season in Hell & The Drunken Boat at Martindale’s Bookstore in Santa Monica.   It was the New Directions edition translated by Louise Varèse.   I still have it.   Shortly afterwards I picked up a copy of Illuminations, also published by New Directions & translated by Louise Varèse.   This was the beginning of a long association with Rimbaud.   Over the years I’ve sought out every translation of Rimbaud that I could, since my French is pitiful.   I really needed to understand what he was doing & why it worked & kept working for me.   That has yet to be adequately answered, so I continue to read & re-read Rimbaud.   Relentlessly.   I’ve kept the Etienne Carjat 1871 photo of Rimbaud (clipped from a book) on the wall in every room I wrote in since 1974.   It is on the wall above the desk where I’m typing this right now.

A few years ago Duncan McNaughton visited me here in Santa Cruz.   We sat outside drinking beer & shooting the shit.   I told him that I felt Rimbaud is more & more important to me the older I get.   I wish I had immediately written down Duncan’s response.   It was brilliant.   All I can recall is that he said “Of course…” & went on eloquently about the passage in a May 15, 1871 letter to Paul Demeny where Rimbaud famously wrote “Romanticism has never been properly judged”.

Last February when the poet Simon Pettet told me that John Ashbery had done a translation of Illuminations that would be released in the spring I was cautiously stoked.   Now that I’ve had a chance to read it, I say it’s a good, solid translation, but I still prefer the Varèse.

In the wood there is a bird, his song stops you and makes you blush.
There is a clock that doesn’t strike.
There is a pit with a nest of white creatures.
There is a cathedral that sinks and a lake that rises.
There is a little carriage abandoned in the thicket, or that hurtles down the path, trimmed with ribbons.
There is a troop of child actors in costume, seen on the highway through the edge of the forest.
Finally, when you are hungry or thirsty, there is someone who chases you away

Compare it to the Varèse translation—

In the woods there is a bird; his song stops you and makes you blush.
There is a clock which never strikes.
There is a hollow with a nest of white beasts.
There is a cathedral that goes down and a lake that goes up.
There is a little carriage abandoned in the copse or that goes running down the road beribboned.
There is a troupe of little actors in costume, glimpsed on the road through the border of the woods.
And then, when you are hungry and thirsty, there is someone who drives you away.

To my ear the Varèse translation just scans better.   Her version of the last line has always hit me hard.   No other translator has nailed it the way she did.

This is the poem Departure—

Enough seen.   The vision has been encountered in all skies.
Enough had.   Sounds of cities, in the evening, and in the sunlight, and always.
Enough known.   The stations of life.—O Sounds and Visions!
Departure amid new noise and affection!
(Ashbery)

Seen enough.   The vision was met with in every air.
Had enough.   Sounds of cities, in the evening, and in the sun and always.
Known enough.   Life’s halts.—O Sounds and Visions!
Departure in new affection and new noise.
(Varèse)

Varèse captures the urgency & speed of Rimbaud.   “The vision was met with in every air” is direct & fluid, where “The vision has been encountered in all skies” just stumbles over the troublesome use of the word “encountered”.

I could go on & on, & I often do, & will.   Just my personal take on it, but I’d say if you only read one translation of Illuminations make it the Varèse.   If then you compulsively need to read (like me) other translations, I’d say check out Oliver Bernard’s literal translations first, then Ashbery, Wallace Fowlie, and Wyatt Mason. That’s a start.   There is no real end.
Posted by Blue Press at 3:56 PM

I thought it all resembled a tragic misinterpretation of Baudelaire

as intimations of fiscal responsibility dogged my unerring
sense of dread
To walk the streets of forever as they slope down to the sea
was all I wanted.   Palm leaves mumbling in the wind.
Beneath the beach concrete I guess maybe Chumash boxsprings
& faces carved into obsidian mirrors
as if any proof was required.   Anyway you didn’t have to
follow me there to read the soft sky repeating itself above
the wet sand moving beneath my feet

still running the voodoo down

I thought I knew the latin phrase for this
& the green sledgehammer light that filters down to the
ocean floor
Posted by Blue Press at 11:24 AM

The light & the dark were perfectly balanced & I staggered through it wearing sunglasses.   It takes a finely threaded stone & a feather of regret to slip the noose aside the pink velvet & tsunami warnings
scanning the dial for the sound of gulls
cemetery shadows
mother of pearl
The Ruins of Time
…all the tarantellas of the coast…
gilded sheetmetal icons with glass eyes & sacrificial beer can huaraches
Han Solo rainwater with a morphine drip
A spoon the color of the sun almost crosses into cool territory
(Tijuana, New Jersey, just south of Zuma)
crippled dreams
bloodshot smile
Egyptian bird head
mythological liquor store clerk
“There wasn’t anything as spooky as those shadows on the pavement”
costa azul
glass beads
raw silk
leaves
“leaving & branching”…

From drownpool carnage to neon inscribed I kept the level gaze intact.   The least silken but reed brown greens of kelp-lit eyes & secret watery extensions were my guide.   What daydrums of cypress parse in sonic platitudes along the gypsy string breeze got snagged in high tension wires before I could ascertain the categorical echo.   Dark passage veering off the reverence.   Revelation still a kind of threat with the light streaming through it. A two-headed pit bull nailed to a prop-driven crucifix drowning in the empty pool of sunset if only to rattle the bones of your heart.   When it’s over there’s still a flicker of wine-colored silk & skatewheel tremors receding in the rearview mirror with dactylic precision.   In another century or three all is forgiven.   From the ruins we’ll watch the fog slip in beneath a subliminal sunset following the zig-zag line that runs from low tide to adios as you anticipate a velvet mirror fadeout with that number 4 expression on your face & those empty swimming pool eyes like six pound shadows.
Posted by Blue Press at 6:20 AM

All the baptismal vestments
& drugstore sunglasses required to perform ablutions
pouring water from a plastic gallon jug over my head
before peeling off the black neoprene & throwing on
t-shirt, shorts, sneakers, sweatshirt against the chill
rips & blades of cold air knifing the damp

& whoever they were they knew my name
Posted by Blue Press at 6:49 AM

“I can barely / hear my mind rattling” –Lewis MacAdams

the last time I was here it rained
Posted by Blue Press at 6:37 AM 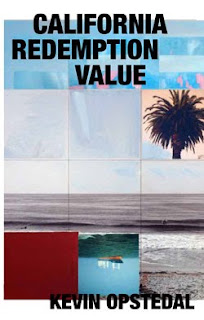 from University of New Orleans Press
Posted by Blue Press at 8:34 AM

There are only three places in that Europe I want to see—
Holland, Hawaii and the Holy Land.
—Philip Whalen

& a chorus of eucalyptus trees

some of it parked in the labyrinth, outside
somewhere
I want to go back         backwards
the old watusi two-step (not in memory of the
Underworld (earth & sea (LIFTED
However we got there

ocean spills over the edge of the sky 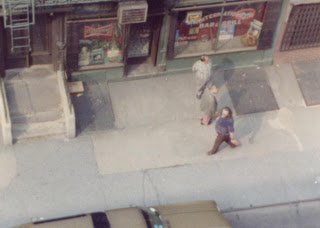 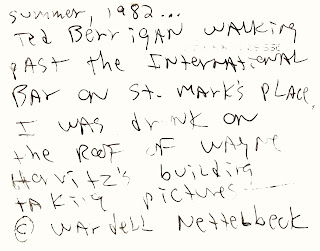 The late great poet F.A. Nettelbeck gave me this snapshot sometime in the 1990s.   Ghosts.
Posted by Blue Press at 6:09 AM