Nine seagulls spinning in the sky
random swoop patterns maybe
not so random after all?

SHUNRYU SUZUKI
“The world is its own magic”

OCEAN WHISPERS
This is your one-way ticket
to the Golden State
………………………………………
1. It Came From the Sea
(a giant octopus ripping the hell out of
the Golden Gate bridge)

2. “I’m going to sit in the sand
& listen to my beard grow”
―Kevin Opstedal

QUO ME CUNQUE RAPIT
TEMPESTAS, DEFEROR HOSPES
The wind off the water speaks
church Latin
only us former altar boys
know what it means

Last Sunday, June 26, I was on the radio reading from California Redemption Value.   You can listen to it online.   God knows what the chatter sounds like (I'm not going to listen to it myself) but I did read as many poems as I could.   The Poetry Show.
Posted by Blue Press at 6:40 AM

All them immensities of the sea
at dark of noon beneath the midnight
sun
candles burning in red glass jars on
Mexican voodoo shrines
underwater
iron saints, Bhikkucitas,
& left-handed martyrs attending

Even the pavement is eloquent
if you listen

North of Malibu
ocean spills over edge of sky
all at once
in B-minor
Posted by Blue Press at 6:26 AM

Return of the Creature

Amazing Grace, where is thy sting
As she slept I whispered
dulce nadas
to the avenging angel
tattooed on her ankle

Sultans of Swing
Whatever drowned indulgence resigns
the threat of remembering obvious
intentions the beach road humming
like a wire exhausted all lingering regret
Posted by Blue Press at 6:32 AM 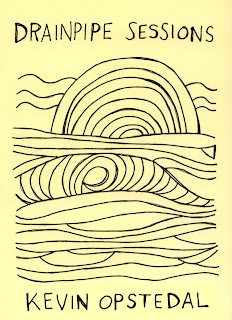 Beneath the relentless surf ghetto aura that pervades these Drainpipe Sessions there is a place where nothing is revealed, acknowledged by the grace of having been there at all.   It’s the catch & release method of poetic composition, the B-side of a once and future flashback, stubbornly adhering to a lyric drive where the measure is meant to be taken in a single breath.   “If poetry is the Atlantis of the arts,” writes Noel Black, “then Kevin Opstedal can breathe under water, and each poem is a pair of shades for a beach blanket apocalypse.”

“There is a fathomless light”

The shattered chrome drainage mirrored on air ripples the mainline stem to float the memory.   Your reflection on the surface of a burnt spoon like the face of Jesus on a tortilla, with redwood stringers glassed in, & diesel sand driven beneath the foam.   We were on the outskirts of an ancient city, like Jerusalem, or Tijuana.   I was there to learn the measure, I said, lighting matches beneath the tidewater architecture & shattered pipes, drizzled in turquoise, in silver, & rust.   Recalling empty parking lots, fjords, & a history of violence, contrary to the haze (my legacy), with mudslide tremors & gaited horses that rustle like palm leaves against the ravished pertinence of so many bronze wings slashing the sky behind you like a kamikaze hood ornament.
Posted by Blue Press at 8:21 AM

Theme from the Unknown

I never learned the art of patience
& at this age I don’t suppose I ever will
the check is eternally in the mail
so that I hear myself say
“Look out for that which swoops down upon ye
in the darkening,
darkling…”
I knew what I was doing
even when I didn’t (know)
as it might be superimposed
the light strumming the valves & hinges
spacing themselves more gracefully than
I would have expected
out along the edge of a drowsy numbness
that was easier to trust than understand
Posted by Blue Press at 1:47 PM

Whatever is going to happen like it already has.   To what purpose then a late turn in the drop explaining less than that unwritten equation with palm tree silhouettes carved into the sunburnt sky.   I’m holding on only so that I can feel it slip away.
Posted by Blue Press at 8:10 AM

“Who swallowed the pearl of wisdom this time?”

silver water
ocean beads
Tsunami Shotgun
“When it’s your dice or mine, all
or nothing,
that she be there in all her splendour”
(Charles Olson)

& nothing else, a blank page, wiped clean
Desire continuously, or at least driven off the
end of the pier

“When you do something, you should
burn yourself up completely, like a good bonfire,
leaving no trace of yourself”
―Shunryu Suzuki
Posted by Blue Press at 5:30 AM

from The Varieties of Religious Experience

Reading the thermometer in Latin, half past Topanga, Santa Barbara & Nagasaki.   A leaf slowly turning yellow, then maybe orange, & later becoming almost translucent?   It’s later than you think, but four hours earlier than that in Samoa, glowing in the dark, a dark like silver, & damp.   We can no longer submit to a compromise so inconclusive, whatever relentless details inform the beach pavement, tilted in the rain, with your picture on the cover.   A cut-off low will bring variable high cloudiness & gusty winds overnight.   The weekend will see monsoon rain & winds riding in on the Pineapple Express, whipping up the waves, channeling the voices of the ancient lost Lemurians.   Begging indulgence without vows or refuge, sinking deep into the underwater pavement, dissolving pearls in gasoline to justify your margins, betrayed by space & time.   The random apprehension where sea meets sky in the pretense & the vapor, to reconcile the distance & the time it takes, steeped in heavy breathing, designed to lull you past the coma.   The lost continent of Lemuria was first discovered by the Vikings during their annual Kon Tiki Barbeque & Surf Competition in the South Pacific.


Stomping with the Lemurians

Augustus Le Plongeon claimed that ancient Mayan writings proved that the Maya of Yucatan were not only older than the later civilizations of Greece and Egypt, but were descendents of a civilization that had existed on the lost continent of Mu (later known as Lemuria).   An Anglo-American explorer named James Churchward, a close friend of Le Plongeon, wrote that the continent of Mu stretched from the Hawaiian Islands to Fiji & from Easter Island to the Marianas.   His findings were set down in the five main volumes of the Mu series published from 1926 to 1931.   By studying various ancient texts Churchward believed he had discovered the existence of the long lost continent that had sunk below the Pacific Ocean after a cataclysmic earthquake approximately 60,000 years earlier.   According to Churchward, the Hawaiian Islands & the Pacific Islands are the remaining mountain peaks of that lost continent.   Madame Elena Petrovna Blavatsky described Lemurians as the third root race to inhabit the earth.   They were egg-laying beings with a third eye that gave them psychic powers & allowed them to function without a brain.

Early morning aerial shot zooming down on a beat-up ‘64 El Camino parked on an empty stretch of the PCH overlooking the beach.   The El Camino is overall a pale sunbleached blue, the hood is bright green, the driver’s side quarter panel painted with rust primer, passenger door black, rear gate white.   There’s a surfboard & a wetsuit in the back.   A man & a woman lean against the front of the car, gazing out at the sea.

MURIEL NITRATE - The ocean is dark like the blood of fuchsias
BENNY IGUNANA - Dedicated to an articulate (though incoherent) neon you might find scribbled onto a spoonful of wet sand
Posted by Blue Press at 6:09 AM

Less the remnant of a half-forgotten tune

The sunlight filtering down thru a bend in the haze does a rhinestone shimmy out on the water that backpedals to Yokohama.   Pelicans dive into the pavement & come up w/beaks full of hubcaps.   Nothing adds up.   If it ever does I might get hauled away from here in a day-glo blue velvet Cadillac El Dorado w/Eddie Poe behind the wheel & a couple cases of opium-spiked Tecate in the back seat.   That kind of carelessness, it isn’t so easy to master.   Standing on the steps of a more classical rendition of the same war of attrition as my smog blue eyes go blank like the slick rock of exposed tidepools, but slowly swaying like a grass skirt underwater, with hand-carved flames.

from The Varieties of Religious Experience by Kevin Opstedal
Posted by Blue Press at 9:23 AM