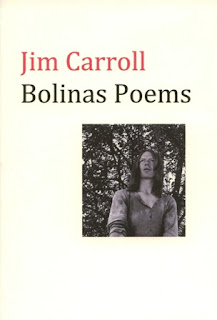 Poet Jim Carroll, who died in September 2009, moved to the small counterculture enclave of Bolinas, California in 1973 and lived there for 5 years.   Bolinas during that time was home to a remarkable number of poets, including Joanne Kyger, Lewis MacAdams, Robert Creeley, Duncan McNaughton and Bill Berkson, to name a few.   Of his time in Bolinas Jim said “I was a total recluse, just using the landscape”.   He was also attempting to kick heroin.   The 10 previously uncollected poems now published under the title Bolinas Poems were written during this time.   They offer a lyric window that opens and shuts on a landscape that is both external and internal.   These are tough, beautiful and essential poems by one of the purest poets that ever snapped off a rhyme.   (Available from Blue Press.)
Posted by Blue Press at 6:31 AM