There Are People Who Think That Painters Shouldn’t Talk: A Gustonbook 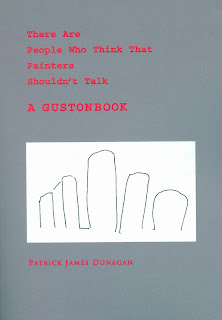 Years ago Patrick Dunagan & I staged a mock fistfight in the middle of Valencia Street one night in San Francisco.   I remember that it was a very honest response to an agrument we were having on the sidewalk, a logical extension of our mutual stubbornness, as well as a performance piece deisgned to shock the other poets we were walking with.   The transition from word wrangling to fisticuffs was flawlessly communicated between us, as if by a kind of empathic telepathy.

There Are People Who Think That Painters Shouldn’t Talk: A Gustonbook could be said to be an example of empathic telepathy. Essentially it is a daybook made up of short sketches of verse, prose & quotations all of which contemplate upon, explore & respond to the life & work of painter Philip Guston within the context of the poet’s day to day ruminations, inside & outside his own head.   The deceptfully easy loooseness, the feel of space (displaced), & the rime of the unreasonable, simply stated, catches air, making relevance almost an afterthought, & therefore GRACEFUL.   It is the kind of guided tour only a poet can take you on.   Such generosity is a rare.   “Believe the lie the myth isn’t”.

More at Post-Apollo Press.
Posted by Blue Press at 2:26 PM